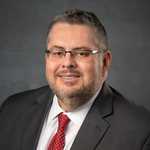 President and lead counsel for the Law Offices of Shawn B. Hamp, P.C. (An Arizona Professional Corporation), Mr. Hamp has practiced for over 19 years with an emphasis in criminal law. He has handled thousands of criminal cases and has represented hundreds of clients in the criminal justice system.

As a former prosecutor, Shawn Hamp handled all types of criminal cases including, DUI/DWI, Drug, and Homicide cases. He brings his experience and dedication to serve those individuals in Northern Arizona accused of committing serious crimes.

Mr. Hamp is a supporter of the local community. He served as a friend of the board for the Boys and Girls Club of Kingman and as past president of the Mohave County Bar Association. The law firm also supports and sponsors scholarships for paralegal and criminal justice studies at Mohave Community College, Toys for Tots, and local Veterans Groups.

At the Law Offices of Shawn B. Hamp, our mission is to protect and safeguard the life and liberty of our clients by providing legal representation to people in Northern Arizona charged with serious crimes. We only accept clients that we believe we can sincerely help.